North East technology giant Sage has announced a multimillion-pound deal to sponsor the conference center and arena being built on the Gateshead Quayside.

The company, which has sponsored the Sage Gateshead music center since its opening in 2024, has agreed a £10m deal to name the new center, which is hoped will create 2,000 new jobs and provide a £70m annual boost to the local economy.

Sage, who champions the small business sector that make up many of its clients, has linked its sponsorship to a number of benefits for SMEs, including work in the construction process for North East firms and access to future conferences for small companies.

The naming rights deal will see the entire development on the Gateshead Quays called The Sage. It is likely that the Sage Gateshead will be re-named when the conference center opens in 2024 to differentiate it from the new facility.

Sage Group CEO Steve Hare said the development of the conference center was “awesome news” for the North East and his company could not resist the opportunity to back the project.

He said: “Sage’s heart has always been in the North East, and today’s announcement embodies our purpose – to knock down barriers so everyone can thrive. The Sage brings the world to the North East’s front door, providing a platform to celebrate the region’s brilliance.

“We are committed to making sure that The Sage is an inclusive venue by giving access to all, no matter their background. We believe it will unlock the huge potential the North East has, attracting greater investment and innovation.” 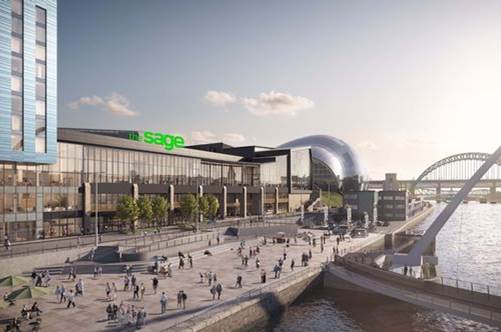 Artists impression of The Sage, a new conference center and arena being built on the Gateshead quayside (Image: handout from Sage)

The conference center is a long-term ambition for Gateshead, with the £300m project completing the work done at the start of the century to create the Sage Gateshead music center and the Baltic art gallery on the Gateshead quays.

It’s hoped the center can attract larger conferences to the North East than it can currently host, with that sort of event bringing thousands of delegates to see the region and spend money with local businesses.

As well as an arena and conference center that will replace the current Utilita Arena in Newcastle, the development will include two hotels, bars, restaurants, and other public spaces.

Funding towards the project has come from the North East LEP and the Government’s Getting Building Fund, with investment group Patrizia providing most of the initial finance.

The development is just across the river from the place where Sage first took shape 40 years ago, with the founders meeting in the former Egypt Cottage pub in Newcastle and choosing the company’s name from a poster on the pub’s wall.

About TimeLinx
TimeLinx delivers innovative project & service management software as a complete solution that perfects the sell-track-manage-support-bill cycle that services organizations must have to delight their customers; TimeLinx brings the cycle together in a single application that offers less frustration, better project management, complete reporting, and improved profitability – all specially designed for Infor and Sage.

Categories
Back to Top

This website uses cookies to improve your experience while you navigate through the website. Out of these cookies, the cookies that are categorized as necessary are stored on your browser as they are as essential for the working of basic functionalities of the website. We also use third-party cookies that help us analyze and understand how you use this website. These cookies will be stored in your browser only with your consent. You also have the option to opt-out of these cookies. But opting out of some of these cookies may have an effect on your browsing experience.
Necessary Always Enabled
Necessary cookies are absolutely essential for the website to function properly. This category only includes cookies that ensures basic functionalities and security features of the website. These cookies do not store any personal information.
Non-necessary
Any cookies that may not be particularly necessary for the website to function and is used specifically to collect user personal data via analytics, ads, other embedded contents are termed as non-necessary cookies. It is mandatory to procure user consent prior to running these cookies on your website.
SAVE & ACCEPT
X